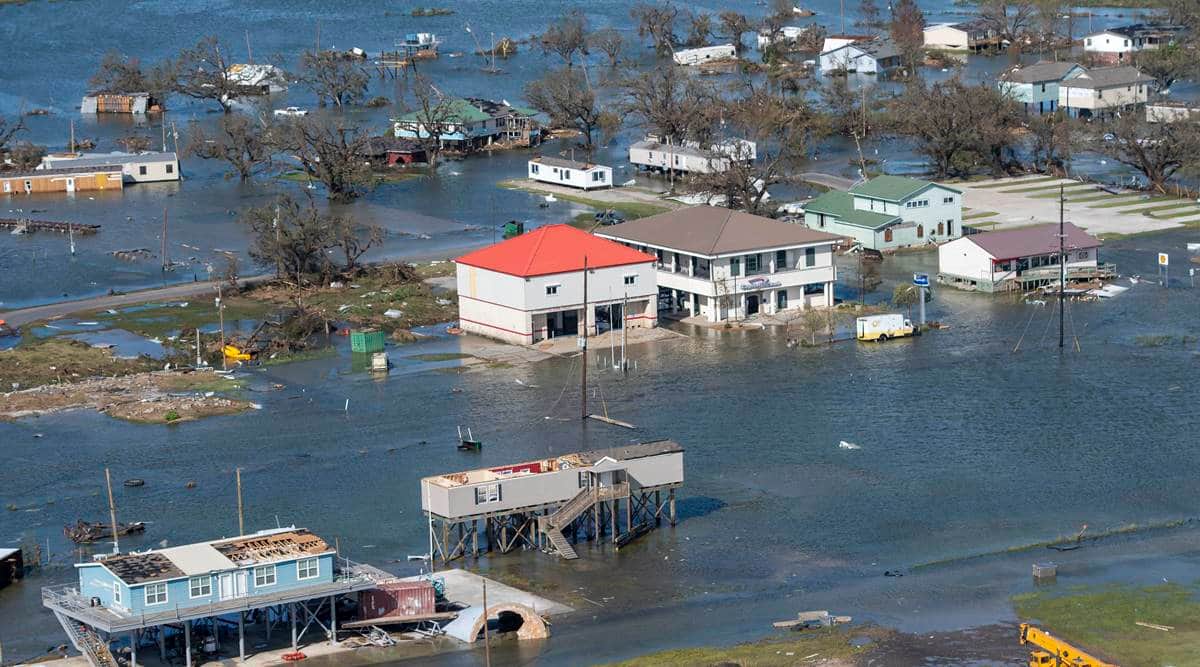 The 2020 Atlantic hurricane season was one for the record books before it even officially started. Researchers and meteorologists began calling for an above-average season in a prediction from University College London on December 19, 2019 – shortly after the end of the 2019 season. As forecasts continued through the winter and spring 2020, they all coalesced around predictions of 15-20 named storms and four major hurricanes. Two months into the season, National Oceanic and Atmospheric Administration (NOAA) released an updated 2020 Atlantic hurricane season outlook on Aug. 6. This updated outlook called for as many as 25 named storms and six major hurricanes, more than double the 1981-2010 historical averages.

At the conclusion of the 2020 Atlantic Hurricane Season there had been 31 tropical depressions, 30 of which became tropical storms or hurricanes. Six of the storms became major (Category 3+) hurricanes, making 2020 the most active Atlantic hurricane season on record.

Through the first part of 2020, the financial impact was minor, with less than $1 billion in total reported damage through July 27. However, later storms, beginning with Hurricane Isaias, were more damaging, with damage assessments for many storms coming in at well over $1 billion. The total aggregate cost for the 2020 season was almost $47 billion, making 2020 the seventh costliest hurricane season in history. Of particular note, nine of the ten costliest Atlantic hurricane seasons have happened since 2004 – the exception being 1992 when Hurricane Andrew caused $27 billion in damages, accounting for all but $302 million of 1992’s costs.

Sadly, more than 430 people lost their lives due to 2020 Atlantic hurricanes. FEMA issued several Emergency Declarations and Major Disaster Declarations. An emergency declaration allows a local or state government to use resources to respond but does not implicate any federal spending. A major disaster declaration provides for individual and/or public assistance spending from the federal government with a cost-share obligation from the states/territories.

United States and CanadaWhile the 2020 Atlantic hurricane season set several new records, it shattered the record for the number of storms to hit the U.S. coastline in one season. According to NOAA, 12 storms hit the continental U.S. in 2020, including five that came ashore in Louisiana. While Canada does not normally experience many impacts from hurricanes, in 2020 it did due to the remarkable storm path of Tropical Storm Cristobal. After crossing over from the Pacific (where it was known as Tropical Storm Amanda), Cristobal made its way up through the Mississippi Basin and across the northern part of the province of Ontario before dissipating over James Bay, close to the Arctic Circle.

In the United States, 2020 was the fifth consecutive above-normal season. Ten storms caused deaths, injuries or significant damage across the country. According to NOAA’s list of billion-dollar disasters, Hurricanes Hanna, Isaias, Laura, Sally, Delta, Zeta and Tropical Storm Eta each caused over a billion dollars in damage. All of these except Hurricane Isaias and Tropical Storm Eta struck along the Gulf Coast between Texas and the Florida Panhandle.

Hurricane Hanna was the season’s first hurricane, forming early in the season on July 25. Hanna made two landfalls in Texas – Padre Island and Kenedy County – before moving to northeastern Mexico. It caused about $1.1 billion in damage in the U.S. and at least $100 million in Mexico.

Hurricane Isaias was the only storm to cause significant damage in the U.S. outside of the Gulf Coast, making landfall near Ocean Isle Beach, North Carolina. It is estimated to have caused more than $4 billion in damage in North and South Carolina, Virginia, Maryland, Delaware, Pennsylvania, New Jersey, New York, and throughout New England and the Canadian province of Quebec.

The U.S. Gulf Coast was struck by eight significant storms throughout the 2020 Atlantic hurricane season, beginning with Cristobal in June 2020. Cristobal made landfall near Grand Isle, Louisiana before moving along the Mississippi Valley and becoming an extratropical depression over Wisconsin – the furthest north a tropical storm has ever traveled in North America. Cristobal’s remnants continued north and finally dissipated over Canada’s James Bay, close to the Arctic Circle.

Hurricane Laura caused catastrophic damage when it came ashore near Lake Charles, Louisiana on Aug. 27, killing at least 77 people and causing at least $8-12 billion in total damages. Hurricane Sally made landfall near Gulf Shores, Alabama on Sept. 16 before moving at the extremely slow pace of 3 mph – approximately walking speed – along the Gulf Coast and then back through Alabama just north of Florida. This slow pace left rainfall totals that were measured in feet, not inches and caused significant damage between $1-3 billion. Five days later, Tropical Storm Beta came ashore along Matagorda Bay in Texas before meandering along the Gulf Coast, adding to the rainfall from Sally in Mississippi, Alabama and Tennessee.

Hurricane Delta made landfall near Creole, Louisiana on Oct. 9, only 12 miles away from where Laura made landfall in August. This complicated the recovery efforts from earlier storms, and brought renewed misery to people whose lives had already been upended by Laura.

CaribbeanWhile the Caribbean was struck by three major storms during the 2020 season, most countries were largely spared catastrophic damage. Hurricane Isaias struck the Dominican Republic and Puerto Rico on July 30 and the Bahamas on July 31. Two people died in the Dominican Republic and a third died in Puerto Rico. Isaias caused approximately $225 million in damages across the Caribbean, including $47 million in damages to agriculture in Puerto Rico alone. Before it struck Lake Charles, Louisiana as a catastrophic Category 4 hurricane, Hurricane Laura killed 35 people on the island of Hispaniola, home to Haiti and the Dominican Republic on Aug. 23. Four people died in the Dominican Republic and 31 in Haiti. Physical damages were relatively light, approximately $100 million across the Caribbean including the Dominican Republic, Haiti, Cuba, Jamaica and the Cayman Islands. Finally, Hurricane Paulette struck the island of Bermuda on Sept. 14, where it caused far less damage than had been expected. Bermuda did not record any deaths, however, two births were reported. Hurricane Paulette was particularly notable for its return as what the National Weather Service called a “Zombie Tropical Storm” after it reformed on Sept. 22 before dissipating for good the next day.

Central AmericaWhile the United States bore the brunt of the early part of the 2020 Atlantic hurricane season, the end of the season wreaked havoc on Central America. Tropical Storm Cristobal crossed over from the Eastern Pacific (where it was known as Amanda), dumping heavy rain on Guatemala before forming and striking the Yucatan Peninsula as a tropical storm on June 5. The remainder of the season was relatively quiet until Oct. 2 when Tropical Storm Gamma developed along the south of the Yucatan Peninsula. While Gamma was expected to move out into the Gulf of Mexico, Hurricane Delta’s effects forced Gamma to remain over the Yucatan where it killed at least six people before dissipating. Hurricane Delta made landfall along the Yucatan on Oct. 7, killing two people and sending thousands of residents and tourists fleeing from resorts along the coast.

Hurricanes Eta and Iota were the two deadliest hurricanes of the 2020 Atlantic hurricane season, killing more than 270 people (211 during Eta and 61 during Iota), mostly in Colombia, Nicaragua, Honduras and Guatemala. According to a fact sheet from the United States Agency for International Development (USAID), approximately 10 million people across these four countries were affected by Hurricanes Eta and Iota. An appeal from the UN’s Office for the Coordination of Humanitarian Affairs (UNOCHA) outlined $90 million in funding required for relief and support as of the end of December 2020. The Nicaraguan Institute of Territorial Studies (INETER) keeps weather-related records for the country, and they stated that Iota was the strongest hurricane to ever make landfall in Nicaragua. According to The Weather Channel: “This is the first time on record two major hurricanes – Category 3 or stronger – have made landfall in Nicaragua in the same hurricane season, much less only two weeks apart. NOAA’s hurricane database only documented seven such Category 3-plus landfalls in Nicaragua prior from the mid-19th century through 2019.”

Long-term recovery across the region is threatened because of the destruction of critical farmland. According to a report from CARE International, up to 70% of the crops in Honduras were affected by Hurricanes Eta and Iota. This new economic challenge predominantly affects small-scale farmers and families who rely on subsistence farming. The Honduran coffee industry has been particularly hard-hit, with the storms destroying a significant portion of this year’s crop. The loss is expected to grow with every additional day it takes the government to repair or replace the damaged roads in the coffee-growing areas.

The Center for Disaster Philanthropy’s (CDP) Atlantic Hurricane Season Recovery Fund has a focus on medium- and long-term recovery from these storms. This includes rebuilding homes and livelihoods, meeting the needs of more vulnerable populations, supporting mental health services and addressing other urgent challenges identified by the affected communities that arise as recovery efforts progress.

FEMA issued 29 disaster declarations related to the 2020 Atlantic hurricane season and obligated a total of almost $375 million in individual and household assistance across 115,127 approved applications as of January 2021. This works out to a total of approximately $3,250 per approved application. Through the Individual and Household Program (IHP), FEMA “provides financial assistance and direct services to eligible individuals and households who have uninsured or underinsured necessary expenses and serious needs. IHP Assistance is not a substitute for insurance and cannot compensate for all losses caused by a disaster; it is intended to meet basic needs and supplement disaster recovery efforts.”

The 2020 hurricane season was a seasons of a higher than normal amount of storms. The 2020 season also continued to trend of hurricanes with rapid intensification. For example, Hurricane Eta’s wind speeds rapidly increased over the course of an hour around 80 miles (130 kilometers) per hour.

What Was the First and Last Named Storm of 2020?

This year, the first named storm, Arthur, was announced on May 17, 2020. The last named hurricane of the season formed on November 13, 2020 and was named Hurricane Iota.

How Many Named Storms Were There in the 2020 Hurricane Season?

The 2020 hurricane season was the fifth year in a row with above-average hurricane activity.

Each year, the World Meteorological Organization creates a list of official names for major storms in the both Northern Pacific and Atlantic oceans. There are six lists of names that have been developed which are rotated into use. Names are only removed from the list when the storm becomes strong enough to create substantial damage as a hurricane.

What Happened When We Ran Out of Hurricane Names in 2020?

When the number of named storms in the Atlantic Basins exceeded 21, then the naming conventions moved to the Greek alphabet. The list of storms that occurred after Wilfred were pulled from the list of the Greek alphabet in alphabetical order: Alpha, Beta, Gamma, Delta, Epsilon, Zeta, Eta, Theta, Iota,Kappa, Lambda, Mu, Nu, Xi, Omicron, Pi, Rho, Sigma, Tau, Upsilon, Phi, Chi, Psi, and Omega.

Which Hurricanes Were Retired from the 2020 Hurricane Season?

From the WMO press release:

2020 – Laura
Laura was a powerful category 4 hurricane (on the Saffir-Simpson Hurricane Wind Scale) that made landfall near Cameron, Louisiana, accompanied by a devastating storm surge of at least 5 meters (17 feet) above ground level.  It was responsible for 47 direct deaths in the United States and Hispaniola, and more than $19 billion in damage.

Leah will replace Laura on the list of names in 2026.

2020 – Eta & Iota
Hurricanes Eta and Iota both made landfall less than two weeks apart during November 2020 in the same area of the Nicaraguan coast just south of Puerto Cabezas. The two powerful tropical cyclones caused extensive flooding in Nicaragua, Honduras and other adjacent Central American countries, resulting in at least 272 fatalities and damage losses of more than $9 billion.

Instead the Hurricane Committee will create a supplemental list of names A-Z (excluding Q, U, as well as X, Y, and Z on the Atlantic list) that will be used if the number of storms exceeds the list of available names on the primary list.